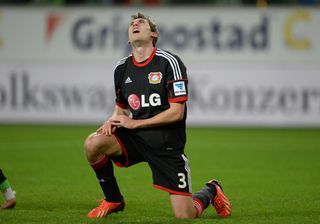 The Germany international has not played for Leverkusen since March's UEFA Champions League defeat to Paris Saint-Germain, having suffered with constant injury woes over the past few months.

However, the 25-year-old has successfully undergone surgery in Switzerland to release a trapped nerve that was found to be the root of his problems.

Reinartz has featured 22 times in all competitions for Leverkusen this term and, while he will miss the final rounds of the Bundesliga, the club are hopeful he will be available for selection next season.

A club statement read: "Stefan Reinartz underwent a successful operation on his damaged calf in Switzerland on Tuesday.

"The 25-year-old Germany international was treated by the renowned orthopaedic and sports consultant Dr Bernhard Segesser, a specialist for Achilles tendon and ligament surgery, near Basel.

"Reinartz will remain in hospital in Switzerland for five days before returning to Leverkusen to start his rehab.

"Stefan Reinartz is expected to be fully fit for the start of training for the 2014-15 campaign."

After making his professional debut in a 2009 loan spell at Nuremberg, the Leverkusen academy graduate has made 184 appearances for the BayArena club, scoring 11 goals and earning three full Germany caps.