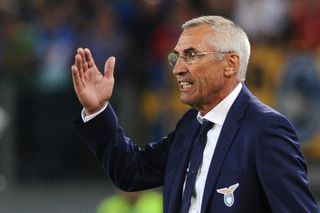 The 68-year-old began his second spell in charge at the Stadio Olimpico with a 1-0 victory over Inter on Monday - only Lazio's second win in nine Serie A matches.

And, despite suspecting that he may have been in line for a return to the club he left in 2012 as news broke of Vladimir Petkovic's likely departure, Reja revealed that he was initially reluctant to enter into discussions with president Claudio Lotito.

"I won't lie, I'd been in touch with Lotito ever since leaving," he is quoted as telling Sky Sport Italia. "I called him maybe once a month, or every six weeks, just for a chat and to see how he was.

"I had a feeling he would call me and, to tell the truth, the first two times I saw it was him calling, I didn't pick up.

"I was so happy at home, without any problems. Then I thought it was only fair to answer and we had a chat, and one thing led to another.

"It was emotional coming back to Formello (Lazio's training ground) with lots of people showing their affection for me, and it brought me a few shivers."