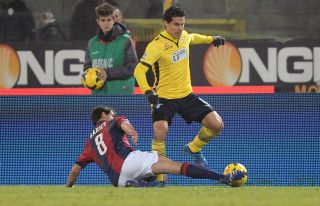 Hernanes, who has been at the Stadio Olimpico since moving from Sao Paulo in 2010, has been a reported target of clubs such as Arsenal, Tottenham and Inter in recent weeks.

However, Reja, who returned to Lazio earlier this month, does not believe the Brazil international will leave in the current transfer window.

"Hernanes? The impression I have is that the lad is fine here. Of course, anything can happen and it’s normal that players look at other situations," he told Rai Sport.

"But honestly, I think he'll stay with us."

Reja also confirmed Lazio, who sit ninth in Serie A, could look to make signings in the window as they seek to climb the league standings after sealing their place in the Coppa Italia quarter-finals with a win over Parma on Tuesday.

"The president has confirmed to me that he's satisfied," he continued.

"Therefore I think we'll go into the market."