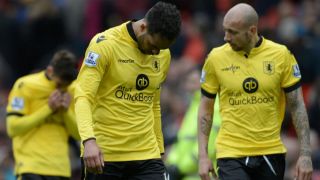 Joleon Lescott says the confirmation of Aston Villa's Premier League relegation following defeat to Manchester United on Saturday is a "weight off the shoulders".

Villa travelled to Old Trafford knowing only a victory would stave off the drop for another week, but they fell to a spirited 1-0 defeat – Marcus Rashford scoring the only goal.

The loss sealed Villa's fate and means they will play in the second tier next season, an outcome which has looked predictable for much of the campaign.

Lescott claimed some of his team-mates may now feel as though a weight has been lifted, urging the team to give the fans "what they deserve" in the remaining matches.

He told reporters: "It's about results, so regardless of how we played in patches today we are relegated. We need to find a way to get out of this run of defeats.

"Now it [relegation] is confirmed maybe it's a weight off the shoulders and we can give these fans what they deserve; some performances.

"We knew before the game what we had to do but coming to Old Trafford is never easy, no matter what situation you're in. Throughout the game we showed a level of pride that there's probably not been enough of throughout the season.

"Throughout the season we have given reasons for people to jump on us. It's part of football, we have to take that on the chin. It's a tough time at the minute. At the back of our minds is next season - to get promoted. I'm here for as long as Aston Villa want me."

Villa interim manager Eric Black echoed Lescott's appraisal of the performance, claiming the players restored some pride and also going on to pledge his support in attempting to achieve promotion next season, should the club opt to retain his services.

"What I will say is today I thought they were outstanding," he said of his players. "Energy levels, desire to stick to the plan. But for some misfortune I thought we could have got a draw.

"Since I arrived the boys have been outstanding. I know there has been criticism, some of it deserved but today they made a step back for the supporters and showed there was some pride for the shirt.

"There are players in there capable of playing in the Championship. People in certain places will make sure that Villa will come back, I'm confident of that and that process has to start now. I would like to be part of it. I've enjoyed working at Villa and it's a fantastic club but that's not important at the moment."