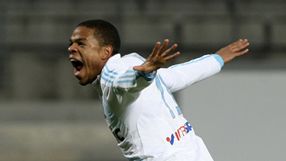 Remy, who has 17 caps for France, could make his debut in Saturday's Premier League clash at West Ham United after agreeing a four-and-a-half-year deal with the West London club.

The 26-year-old looked poised to join Newcastle United after Marseille announced they had agreed a fee and given Remy permission to speak to the north-east club.

"I didn't think we'd get him to be honest but [chairman] Tony Fernandes worked ever so hard on this. He wouldn't give up on it, and it's great that we now have him here with us," manager Harry Redknapp said on the club website.

"He's always been a player I've admired. I've watched him on so many occasions throughout the last few years. I actually spent three or four hours with him last year so he knew what I thought of him, and I think that was important.

"He's quick, can score goals and makes great runs. His movement is excellent. He's got the potential to be a really outstanding striker."

QPR are bottom of the Premier League with just 14 points from their opening 22 games.

"I want to develop my game here," Remy said. "This season the objective is to stay up but beyond that we have greater objectives."

QPR are also hopeful of signing Rennes midfielder Yann M'Vila as Redknapp strengthens the London club's squad in a bid to escape relegation.