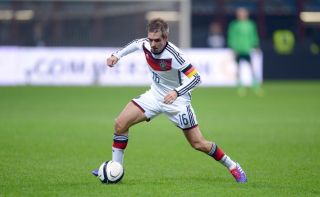 After another hectic season with Bundesliga champions Bayern Munich, Lahm was struggling with an ankle injury.

But he has begun individual training ahead of the FIFA World Cup, which starts in Brazil next month, and is on the verge of a full return.

Bastian Schweinsteiger is also on the mend following a knee injury but goalkeeper Manuel Neuer (shoulder) is unlikely to be involved in Germany's training camp in Italy.

"It's a huge positive to have him (Lahm) back on the training ground," said Bierhoff, who represented Germany at both the 1998 and 2002 World Cup.

"We're confident of his recovery. Philipp and Bastian Schweinsteiger are giving us constant feedback on their situations, but will hopefully soon be back in training with the whole team.

"For Manuel it's going to take a little longer.

"I don't think we'll be working with him (Neuer) while we're here in South Tyrol."

Germany will face Portugal, Ghana and the United States in Group G at the 2014 World Cup.