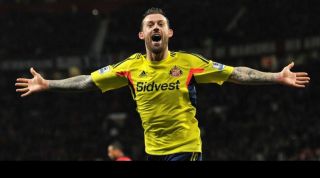 The Scotland international played only 45 minutes at Heritage Park on Saturday, but left a telling impression after missing the closing months of last season with an ankle injury.

Darlington had looked threatening during the early stages, but it was only a matter of time before Sunderland's top-flight superiority shone through and a second goal swiftly followed.

Fletcher, whose last outing came against Crystal Palace on March 15, doubled his tally by tapping in George Honeyman's low delivery.

Billy Jones was the only one of Sunderland's new signings to start, but fellow close-season arrivals Costel Pantilimon and Jordi Gomez emerged from the bench at half-time as head coach Gus Poyet made wholesale changes.

Sunderland extended their lead a minute after the break as Emanuele Giaccherini slotted home following Connor Wickham's backheel, while the latter netted the fourth with an emphatic finish in the 70th minute.

Gary Brown pulled one back a few moments later from inside a crowded area, but Sunderland restored their four-goal cushion in the closing stages as debutant Gomez drilled in from 20 yards.