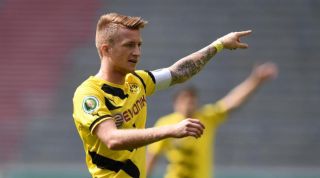 The pair played 45 minutes in a match behind closed doors against Bochum's Under-23 side, attacking midfielder Gundogan finding the net in a 2-0 win for Dortmund.

Gundogan has not played since August of last year due to an on-going back problem, while forward Reus has been on the sidelines for a month after tearing ankle ligaments for the second time during international duty for Germany.

But both are in line to feature in Dortmund's next Bundesliga match at Cologne in eight days' time after sporting director Michael Zorc – who watched the game along with coach Jurgen Klopp - expressed his satisfaction with their performances.

"Both of them looked very good," Zorc told Dortmund's official website. "Especially when you consider how long Ilkay has been away.

"He looked very comfortable on the ball, but it was only his first test and it was only for one half so we shouldn't attach too much importance to it."