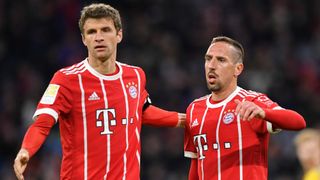 The Bundesliga champions emerged victorious from an entertaining encounter at the Allianz Arena in their final warm-up match before their title defence resumes against Bayer Leverkusen on Friday.

Kingsley Coman broke the deadlock after 33 minutes, turning in an Arjen Robben cross, but Saliou Sane's penalty made it 1-1 at half-time.

Bayern made 11 changes at the interval and restored their lead five minutes into the second half, with Thomas Muller finishing coolly after a good move involving Ribery and Meritan Shabani.

Pascal Sohm levelled again for the 3.Liga side, taking advantage of a defensive mix-up to score from more than 30 yards out, but Ribery's fine run and finish made it 3-2 three minutes later.

Grossapach levelled for a third time thanks to Mario Rodriguez before Ribery tapped in Felix Gotze's cross, capping an extraordinary start to the half, which saw five goals scored in 18 minutes.

Ribery completed his treble with a good low finish to make it 5-3, as Bayern now turn their attention to Leverkusen's visit this week.