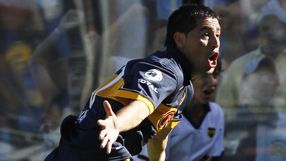 Boca took their tally to seven points in seven matches with the victory at Colon's Elephants Graveyard ground in Santa Fe. Both their wins have been away from the Bombonera where their unsettled team have struggled under the pressure from their demanding fans.

Riquelme took the free-kick on the hour outside the box on the right and with players jostling in front of goal as they expected the ball to come curling towards them he surprised goalkeeper Diego Pozo by placing it inside the top near corner.

"I'm happy to have scored a goal that gave us a win. We needed a triumph and today we managed to get it," Riquelme told reporters.

Colon had Ariel Garce, a defender in Argentina's 2010 World Cup squad, sent off three minutes from time for a studs-first lunge at Boca substitute Nicolas Colazo.

Boca, who have only scored three goals while conceding eight, are still a lowly 17th, eight points behind leaders Estudiantes in the Clausura championship standings.

Velez Sarsfield, runners-up to Estudiantes in the Apertura championship in the first half of the season, beat Arsenal 3-0 at home.

Uruguayan striker Santiago Silva, top scorer in the Apertura, netted their first from a penalty for handball. Midfielder Ricardo Alvarez added another with a lob and striker Juan Manuel Martinez rounded out the scoring.

Estudiantes have 15 points after their fifth win in seven matches, 3-0 against All Boys on Friday.

They are two points ahead of San Lorenzo and last week's leaders Olimpo, who met in Bahia Blanca on Saturday where the Saints notched up a 1-0 away victory with a goal by Uruguayan striker Juan Manuel Salgueiro.

San Lorenzo have a game in hand after their clash at Velez Sarsfield last weekend was abandoned following the death of a Saints fan during fighting outside Velez's "Fortin" (fortress) ground in the far west of the capital.

River Plate climbed to fourth on 12 points, ahead of Racing Club on goal difference, after two goals from striker Leandro Caruso gave them a 2-1 home win over Newell's Old Boys.