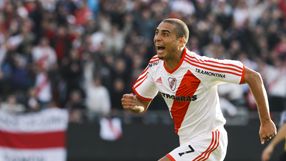 Playing the "Superclasico", Trezeguet takes another step in a remarkable denouement to a career that brought him World Cup and European Championship winners' medals.

Six months after signing for River, he helped the team he supported growing up in Buenos Aires win the Primera B Nacional championship in June, ending the trauma of their relegation a year earlier.

Trezeguet, now team captain, flew into Buenos Aires on Thursday from Monaco where he spent a few days with his children, dealt with some personal issues and trained at his former French club's La Turbie grounds overlooking the Mediterranean.

"I'm starting to feel the climate [of the Superclasico]," Trezeguet told reporters on arrival as he headed for River's afternoon practice at their training grounds near Ezeiza airport.

He missed last weekend's 1-0 defeat at Quilmes that clouded River's build up to Sunday's clash at the Monumental after they had chalked up two successive high-scoring wins.

Never has the time span been so long between one competitive Superclasico and another. With River out of the first division for a year, they have not faced their bitter enemies for 17 months apart from two friendly defeats last January.

Neither River nor Boca are having good seasons, which merely adds to the tension and expectation of a match unrivalled for passion with both sets of fans exchanging insulting chants and where defeat can plunge the losers into deep depression.

Trezeguet's opposite number in the Boca side is burly, shaven headed Uruguayan striker Santiago "Tank" Silva, who will be looking for his fifth goal of the season and confidently predicted he would score the winner.

"Sunday's match is the key to show we can play well and pull out of this situation [of poor form]. I can see myself celebrating," Silva told a news conference on Wednesday.

There is far more than mere bragging rights at stake for the two coaches, River's young top flight debutant Matias Almeyda and grizzled veteran Julio Cesar Falcioni, who has become increasingly unpopular with the Boca fans.

Almeyda, a World Cup midfielder with Argentina in 1998 and 2002, has bitter memories of the last Superclasico in May 2011, a 2-0 defeat for River at Boca's La Bombonera in which he was red carded and left the field defiantly kissing the badge on his shirt.

Less than two months later River were relegated, Almeyda retired and club president Daniel Passarella handed him the reins for the tough climb back out of the B Nacional.

Almeyda has had mixed results throughout his fledgling coaching career. He has looked to build an attacking side in the best River traditions and appeared to have made a breakthrough with nine goals in two games before the doubts returned at Quilmes.

Former goalkeeper Falcioni, who delivered Banfield their first league title in 2009 and Boca their 24th last year, plays a dour, cautious, 4-4-2 game the fans have tired of without the flair the team have lost since Juan Roman Riquelme quit in June.