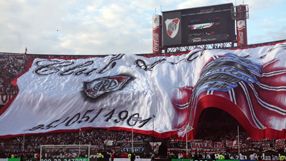 The red and white banner measuring 7,829.74 metres was paraded by thousands of fans from the site of River's former ground in the Palermo district of the capital to the Monumental, their giant World Cup stadium in Nunez opened in 1938.

The fans' timing coincides with the team's improved form in their last two matches in which they have scored nine goals and conceded none, including Sunday's 5-0 rout of Godoy Cruz at the Monumental.

Fans then watched a match in the Monumental between the River reserves and their under-20 team, who are South American champions.

Sunday's victory was River's first at home this season after two draws and two defeats following their promotion back to the first division. They are in mid-table with 15 points from 10 matches.

The immensely popular River were relegated for the first time in June 2011 after a decade of poor management.

They renew their league rivalry with the equally well-supported Boca Juniors in the "Superclasico", the biggest club match on the Argentine calendar, in their next home match in three weeks time.