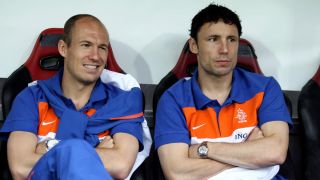 Mark van Bommel has rued the fact that Arjen Robben has had to retire from international football on a low after Netherlands failed to qualify for next year's World Cup.

Although Robben scored twice as Netherlands ended their qualifying campaign with a win over Sweden, the damage had already been done and Dick Advocaat's side missed out on a play-off place on goal difference.

The Bayern Munich winger announced his decision to quit the international stage after that victory, but Van Bommel is frustrated that a fine player could not bow out with a title.

"An absolutely exceptional player like Arjen deserves a worthy farewell instead of this failed World Cup qualifying campaign," he told Bild.

"He would be entitled to end his impressive national team career on the highest level. Winning a final would be a match for his qualities."

Van Bommel and Robben were both part of the Netherlands team that lost in the 2010 World Cup final, with the former revealing that a number of players had discussed retiring if they had beaten Spain in South Africa.

"During the 2010 World Cup, we were sitting with a few other players, joking about quitting if we were to get the title," he said. "There could have been no better time. Unfortunately we could not win."

But Van Bommel continues to see Robben as a source of inspiration for young players now.

He added: "Arjen is a living example of someone who knows how to get everything from his career by putting his all into it.

"I regularly tell players about the 100 per cent dedication Arjen shows every day. He's a classic example of this."