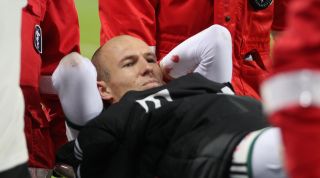 And Robben (gashed knee), Schweinsteiger (ankle) and Badstuber (knee) are among the 27-player party set to be put through their paces in Asia as they continue their rehabilitation from spells on the sidelines.

Winger Robben was ruled out for six weeks at the start of December, while midfielder Schweinsteiger has been absent since undergoing ankle surgery in November.

Defender Badstuber is battling to get his career back on track after two cruciate knee ligament injuries, with the 24-year-old's last competitive appearance coming in a Bundesliga clash against Borussia Dortmund in December 2012.

"I'm hoping it'll be quick. After two or three days he might be able to manage parts of the squad sessions," Sammer told the club's official website.

On Robben, he added: "We'll take a very good look at how well he copes with the training load, but we can definitely say this: given the extent of the injury, his recovery is optimal."

Bayern face friendlies against Al-Merreikh on Thursday and Kuwait SC on January 13 before returning to Europe for an exhibition against Salzburg prior to resuming their Bundesliga title defence at Borussia Monchengladbach on January 24.