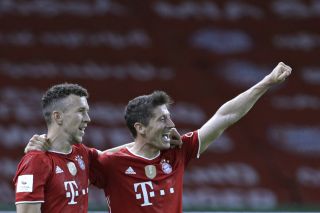 Robert Lewandowski struck twice as Bayern Munich completed a successive domestic double with a 4-2 victory over Bayer Leverkusen in the German Cup final.

A David Alaba free-kick and Serge Gnabry strike put Bayern on course for victory in Berlin before Lewandowski took his tally for the season to 50 with a third just before the hour.

Sven Bender gave Leverkusen some hope but Lewandowski’s second in the 89th minute put the result beyond doubt, although Kai Havertz added a penalty in stoppage time.

It was an 11th successive victory for Bayern since German football resumed following the stoppage for the coronavirus outbreak.

They will now hope to go on and make it a treble by winning the Champions League in August. They lead Chelsea 3-0 after the first leg of their last-16 tie.

Juventus took another step towards a ninth consecutive Serie A title as they overpowered Torino 4-1 in the Turin derby.

Paulo Dybala and Juan Cuadrado put Juve 2-0 up inside the opening half-hour and Cristiano Ronaldo made victory safe with a free-kick after Andrea Belotti pulled one back from the penalty spot.

A late Koffi Djidji own goal added gloss to the scoreline on the night veteran goalkeeper Gianluigi Buffon made a record 648th Serie A appearance.

Lecce’s relegation fears increased as they were beaten 4-2 at mid-table Sassuolo.

Late goals from Jeremie Boga and Mert Mulder won it for Sassuolo after Lecce had twice come from behind with strikes from Fabio Lucioni and Marco Mancosu cancelling out efforts from Francesco Caputo and Domenico Beradi.

In Spain, Valladolid claimed their first win in six LaLiga games as a late goal from Joaquin earned a 1-0 victory over Alaves. Joaquin struck following a set-piece two minutes from time, lifting his side 10 points clear of the relegation zone.

Zouhair Feddal equalised 11 minutes from time as Real Betis grabbed a 1-1 draw at Celta Vigo. Nolito had opened the scoring for the hosts midway through the first half.