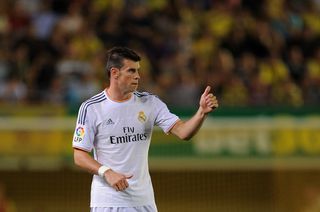 Real splashed out a reported €100million (£85.3m) to bring the Wales international to Spain at the end of the transfer window last month.

The size of the fee was criticised by some at the time of Bale moving to Spain, including Barcelona coach Gerardo Martino, who intimated that the price paid reflected a "lack of respect" for the financial conditions in the world outside of football.

However, Carlos - a member of the last Real side to win the UEFA Champions League in 2002 - believes that Bale is worth the outlay.

"They have paid that because he deserves it," he told AS.

"They also paid a lot for (Zinedine) Zidane, (Luis) Figo, Ronaldo, Cristiano (Ronaldo). Barcelona also paid much for Neymar. They are worth it.

"That is why I don't understand Tata Martino's critique of the signing of Bale alluding to the economic situation. I have to pay for this type of player."

Carlos, now manager at Sivasspor in Turkey, was part of the first 'Galacticos' era.

Real have once again spent big to try and ensure success at the Bernabeu, but the 40-year-old does not believe the likes of Bale and Cristiano Ronaldo can be compared to the side he played with.

"Do not compare," he added. "This Madrid is great, but to be equal or better they have to achieve what we did."

Carlos, though, is hopeful that Real can secure their elusive 10th Champions League title, despite a disappointing start to their domestic campaign that has left them five points adrift of Barcelona and city rivals Atletico.

"In the league we are not going well," he explained.

"But many times we had that and we won the Champions League."