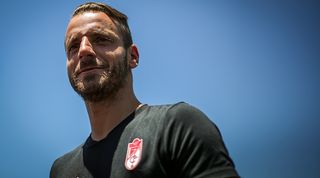 Spurs signed Soldado from Valencia for a then-club record fee of £26m in summer 2013.

However, the Spanish striker struggled to live up to his price tag, scoring just six Premier League goals in his debut campaign in England.

Soldado then netted just once in the league in 2014/15, before returning to his homeland with Villarreal the following summer.

But despite his failure to become a key player at Tottenham, Soldado – who joined Granada this summer after a stint in Turkey – believes he developed his all-round game in north London.

“My spell in England changed the way I played,” he told LaLiga. “Before maybe I was a player who waited a lot in the box, who didn't get involved so much and now maybe, after going to England, you change that a little.

“I got more involved. But I know they [Granada] have signed me to score goals and I'm going to do everything I can to score as many as possible.”

Soldado spent two years at Villarreal following his Spurs exit, before representing Fenerbahce in 2017/18 and 2018/19.

His contract in Turkey expired at the end of June, and he opted for a return to LaLiga with Granada.

The centre-forward has now played for six sides in Spain, including Osasuna, Getafe and Real Madrid, his first club.

And Soldado has explained what it was like to replace Zinedine Zidane on his Blancos debut against Valencia in 2005.

“A lot has happened since then, but it's true that it was a game I think we lost 2-1," he added. "The team was losing and it was my debut. Coincidentally it was against Valencia, which is where I'm from.

“But yes, I remember some impressive moments, because if you're a Real Madrid academy player, playing at the Bernabeu is the ultimate. More so in a game against Valencia. It was a dream come true.”

Soldado has locked horns with some top-class centre-backs during his time in LaLiga, but he singles out former Barcelona stopper Carles Puyol as his toughest opponent.

“I would say Puyol is the one who's made me suffer the most," he said. "I think it was like war with Puyol. He was the most aggressive defender there was, the most heavy-handed. And he was the one who complained the most.

"But yes, there was a nice rivalry there and maybe he's the one who's given me the toughest battles.”

Soldado has made three appearances for Granada so far this season, scoring one goal.