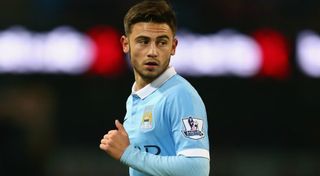 Manchester City winger Patrick Roberts is set to complete a loan move to Celtic over the weekend, manager Manuel Pellegrini has confirmed.

The England Under-19 international is expected in Glasgow to complete a medical after the Premier League club agreed a deal with the Scottish champions, but Pellegrini insisted Roberts remains a big part of the club's long-term plans.

Roberts has only been at City for half a season after transferring from Fulham in a deal rumoured to be worth £12million, making three substitute appearances during the campaign.

He will now continue his career at Celtic, with reports suggesting Ronny Deila's side have negotiated an 18-month loan, although the length of the agreement is yet to be made official.

"He is a very good player and I am sure that Patrick will be a very important player here in the future," Pellegrini said.

"Patrick will go on loan to Celtic – the arrangements were made before this [Kevin De Bruyne injury] and we don't want to cut the option to play more games at Celtic.

"I thought it was important that he trained with our first team for the first half of the season. But to play more games for him at Celtic will be better than to stay here and just play some games. It will be a very important option for him."