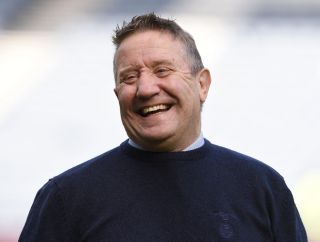 Inverness manager John Robertson enjoyed claiming another Scottish Cup scalp on the anniversary of the club’s most famous result.
Caley Thistle’s 1-0 win over Livingston sealed a quarter-final spot came 20 years to the day after Inverness defeated Celtic 3-1.
Robertson’s side have a real affinity with the competition – reaching the semi-finals last season – and the manager was delighted to have another chance to reach Hampden.
Robertson explained: “It was 20 years ago the club got the result that put them on the map.
“It’s nice the team has responded on a day like this, we have a proud tradition in this cup, started by that result.
“It was nice to build on our Scottish Cup pedigree with another big scalp – people forget Livingston are a top-six Premiership team.
“To take their scalp today is a real feather in the cap for the lads and a nice booster for the lads as well.”
The match took place amongst heavy winds, with Storm Ciara making it difficult for either side to play decent football.
But the frustration for Livingston manager Gary Holt was that the deciding goal stemmed from a mistake from his side, with Sean Welsh’s strike coming directly from a free-kick.
“I don’t think the conditions made it a game of football for either team,” he said.
“We talked at half-time about not making mistakes, and it’s a mistake that cost us, simple as that.
“If the lads think that was pass marks to go and win games and stay in the team, it’s not. They will have to have a look at themselves.
“We didn’t do enough in the game to win – I’m not so sure we deserved to lose the game, but a simple mistake cost us. It’s hard, because we’re out of the cup.”