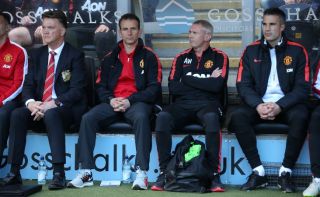 Robin van Persie spent three years at Manchester United, each under the guidance of a different manager, and has admitted to a difficult working relationship with compatriot Louis van Gaal.

Van Persie’s first season was by far the most successful, as he scored 30 goals on the way to securing Alex Ferguson’s last Premier League title.

When the legendary Scottish manager stepped down at the end of the 2012/13 season, it was announced that David Moyes would be taking his place on a six-year deal.

In the end, he lasted just shy of ten months in the Old Trafford hotseat as the United squad struggled to adapt to life after Ferguson.

Then came Louis van Gaal, a proven winner who was appointed shortly after taking the Netherlands to the semi-finals of the 2014 World Cup with a limited group of players.

Van Persie was one of their few stars and thrived under van Gaal’s management, prompting many to believe that he could reinvigorate the striker following a difficult year at club level.

In and out of the team, van Persie’s relationship with van Gaal deteriorated and he was moved on to Fenerbahce for a cut-price fee. It was the end of his Premier League career.

In a Twitter Q&A, the Dutch international explained how his feelings towards van Gaal had evolved during their time together.

“That started off awkward. Shortly afterwards it was great for two years. Then we had a small dip for a year but now it's lovely again. That's life guys!” he tweeted.

Van Gaal spent two years in charge of Man United, claiming the FA Cup by beating Crystal Palace at Wembley in his final game before being replaced by Jose Mourinho.

After a spell in Turkey, Van Persie returned to his first club Feyenoord. He retired from playing last summer at the age of 35.