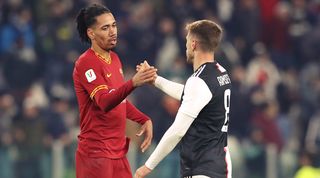 Christian Eriksen became the latest Premier League star to swap the grey skies of Blighty for la dolce vita when he secured a move from Tottenham to Inter Milan this week.

The Dane followed what has become a well-worn path since last summer, when there was something of an exodus of players heading from England to Italy.

This month alone, Eriksen has joined Ashley Young, Asmir Begovic and Victor Moses in starting a Serie A adventure.

But what about those who made the move last summer – have they flopped or flourished so far?

Much like Juventus as a whole under Maurizio Sarri, Ramsey’s progress in Turin has been slow and steady rather than spectacular.

The Wales midfielder was unfortunate to begin his spell at Juve on the treatment table, and his search for consistency has stuttered as injuries continually flare up.

A goal on his debut against Verona was a good start (albeit with the aid of a big deflection), with Sarri opting to predominantly deploy Ramsey in a trequartista role behind two strikers.

But with the coach frequently chopping and changing his selection, Ramsey is often the man to suffer by being dropped or subbed off – he’s yet to complete 90 minutes in any competition this season.

Lukaku was placed at the top of Antonio Conte’s wish-list when the coach took over at San Siro last summer, and the Belgian has been worth every penny so far.

The 26-year-old is a man reborn; his shoulders are no longer slumped, and his confidence has been restored.

Lukaku immediately struck up a lethal partnership with Lautaro Martinez, and they have scored 26 Serie A goals between them so far, 14 of which have come from the former United man.

He wrote history in the process by matching Ronaldo’s record of nine goals in his first 11 Serie A games. Wrecking-ball Romelu is back.

Smalling’s form and popularity in the Italian capital can be summarised by the nickname he quickly earned: Smaldini.

The 30-year-old has been a tremendous success in Rome so far, becoming the most reliable member of Paulo Fonseca’s defence and providing some impressive individual displays.

But it’s not all been plain sailing. In the dying minutes of a Europa League group game at home to Borussia Monchengladbach, Smalling was smashed him in the face by a shot.

The pain became worse when Scottish referee Willie Collum inexplicably awarded the visitors a penalty for handball and, without VAR to prove him wrong, the Germans equalised. Double ouch.

It’s been a frustrating season for the Armenian. He started well, scoring on his debut against Sassuolo, only to become plagued by injuries.

Roma have been beset by fitness issues this year, and Mkhitaryan has been one of the worst-hit after a muscle tear ruled him out from October to December, before a thigh strain sidelined him again in January.

There have been promising signs between the niggles though, and he has a commendable three goals in nine Serie A games.

Not many players have made as instant an impact at a new club as Danilo at Juve.

The Brazilian was introduced for the injured Mattia De Sciglio in a crucial league meeting with Napoli back in August, and remarkably scored within 26 seconds of coming on.

Juve ultimately won 4-3, but it wasn’t enough to earn Danilo a regular spot. He has gone in and out of the team, fighting with Juan Cuadrado for the right-back spot, but tends to be Sarri’s go-to option when he wants more defensive solidity.

The Colombian spent last season on loan at Napoli and did enough to convince the club to sign him permanently over the summer.

This term, Ospina’s game time has been limited as he plays second fiddle to emerging Italian talent Alex Meret.

But the 31-year-old hasn’t always grasped his opportunities when they come; have a look at his catastrophic error in the 1-0 defeat to Lazio for an example.

Llorente has been used largely as an impact sub by both Carlo Ancelotti and his successor Gennaro Gattuso in a turbulent season in Naples, starting just three of his 17 Serie A appearances so far and scoring three times.

He does feature off the bench almost every week though, including in all six Champions League group games, and he found the net in September’s 2-0 win over Liverpool.

He’s been linked with Inter throughout the January window, as Conte targets a physical frontman.

Darmian hasn’t been turning heads in Parma the way he did with barnstorming performances at Torino in years gone by, but the full-back has featured regularly in an impressive campaign for his new side.

The 30-year-old has made 17 appearances so far, helping the Crociati rise to the unexpected heights of seventh place and the brink of the European spots.

Another member of the walking wounded at Roma, Zappacosta is set to stay on for the remainder of the season as he finally approaches full fitness again.

The defender played just 12 minutes of football for the Giallorossi before rupturing his cruciate ligament in August, which will keep him out for another few weeks yet.

Poor Alexis Sanchez. His loan move (which has United continuing to pay the majority of his salary) has not exactly reinvigorated his career: a tendon injury has seen him miss three months of the season already. From five Serie A games, he has bagged one goal – in a game in which he was also sent off.