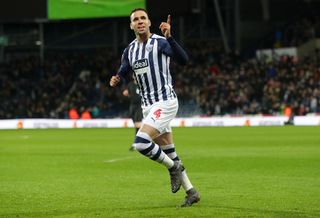 West Brom stretched their lead at the top of the Championship to seven points after a routine 2-0 win over Preston.

North End had to play the last 26 minutes with 10 men following the straight red card issued to right-back Darnell Fisher.

The Baggies moved further clear of second-placed Leeds, who play on Wednesday, while their advantage over Nottingham Forest in third is 10 points.

West Brom threatened with an early set-piece when Filip Krovinovic’s curling free-kick flew a foot over the crossbar.

The hosts took the lead in their next attack in the sixth minute as Preston were caught ball watching in their own penalty area.

Callum Robinson floated a ball in from the left and after Ben Davies and Andrew Hughes failed to challenge, Robson-Kanu got between them, chested the ball down and bundled home left footed from six yards out.

It was the Wales international’s 10th goal of the season, the best tally of his career.

West Brom went close to doubling their lead in the 29th minute. Matheus Pereira split the defence to find Robinson, whose first-time shot was parried by Rudd and bounced just in front of goalline before Fisher cleared.

Preston failed to mount any threat until the 32nd minute, when David Nugent climbed above Dara O’Shea to glance just wide from Fisher’s hanging cross.

Pereira again split the defence for Robinson, and Rudd produced more heroics to block his shot then parry Krovinovic’s volley into the ground from the rebound.

Albion’s second goal duly arrived in the 45th minute after more pedestrian defending. Livermore speared a left-foot volley into the far corner of the net from 15 yards after Robinson’s cross from the right was chested down by Robson-Kanu.

The second half was largely uneventful until Fisher’s dismissal for lunging in on Robinson in front of the dugouts.

Albion could and should have made it a more comfortable victory.

Substitute Charlie Austin’s shot was tipped over by Rudd and Rekeem Harper’s curling effort hit the top of the bar.