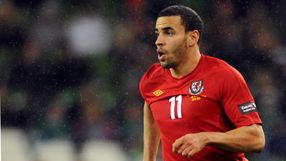 The Reading flyer, who can operate down either flank, has won three caps for Wales and could now play a key role in the Euro 2012 qualifier against England at the Millennium Stadium in Cardiff following Bale’s withdrawal from the squad.

Although Robson-Kanu represented England up to under-20 level, there is no likelihood of split loyalties for the pacey forward, who qualified for Wales through a grandmother from Caerphilly.

“I am very much Welsh, I feel Welsh and the supporters have taken to me,” said Robson-Kanu. “I also have Nigerian heritage, but I have chosen to play for Wales and I am very happy with that decision. Going into a game like this, it doesn’t come into your head. It’s important for me to stay focused on what I have to do and that’s what I am concentrating on.”

Robson-Kanu, who was born in Acton, celebrated his 21st birthday last May by making both his under-21 debut for Wales and his senior international debut in the space of one week. He would relish the prospect of making his first appearance in front of the Welsh home crowd in Cardiff.

“It would be fantastic. As a player you look forward to games like this. I’m still young, I’m only 21, and I hope there will be more of them ahead,” he said earlier this week. “Obviously, there’s a lot of excitement surrounding the game, but we are really focused on what we need to do, the result we need to get and the performance we need to give.

“We are going to have the home fans behind us and there will be an outstanding atmosphere. We are hoping we can put on a performance for the fans and we know the home crowd will get behind us.”

Robson-Kanu said he had not considered the implications of distractions within the England camp, centred around the debate over John Terry’s reinstatement as captain.

“We’re just focused on ourselves, really; we can’t really control others or what is going on in other camps. We’re just making sure we are as well prepared as we can be," he said.

A pacey winger who can also make an impact as a striker, Robson-Kanu said that, if selected, he would not change his approach in the build-up to Saturday’s Group G clash.

“I have got to take it as another game and prepare for it as I would any other game. It’s about making sure the preparations are right and that you stay focused on what you have to do.”

However, Saturday could provide a golden opportunity for the winger, who is out of contract with Reading in the summer, to press his claim for Premier League football.