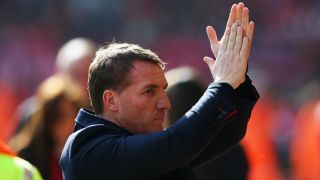 Liverpool manager Brendan Rodgers is seeking a response from his side after their 13-match unbeaten Premier League run came to an end against Manchester United on Sunday.

Since a 3-0 defeat to United back in December, Rodgers' side picked up 33 points from those 13 games to give themselves a chance of a top-four finish and a return to the UEFA Champions League next season.

However, Sunday's 2-1 loss at Anfield - which saw Steven Gerrard sent off for a stamp on Ander Herrera just 38 seconds after coming on as a half-time substitute - leaves Liverpool five points behind fourth-placed United.

Liverpool's next outing comes at Arsenal after the international break, and Rodgers remains positive about his team's chances of breaking into the top four.

"It's a big challenge, but when I looked at the 10 games that were remaining, it was always going to be difficult to win all 10 of them," he said.

"We'd hoped it wouldn't be in this game against a rival but it's still very much possible.

"It's five points the difference between us and them, we've now got to recover and use this as the same springboard as we did in the last game.

"We went on an incredible run that's at least given us the opportunity and the chance. We'll go away now and look to get a victory in our next game."