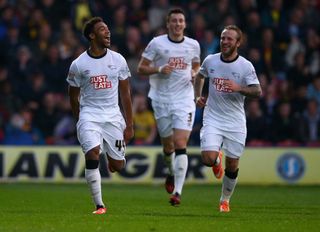 The pacy 19-year-old has impressed during his time with the Championship promotion-hopefuls, scoring five goals in 19 appearances in the second tier.

Rodgers has been monitoring Ibe's progress and is considering bringing the talented teenager back to Anfield this month.

"He has been great," said Rodgers. "We get a report, we have scouts that go out and monitor the players at the clubs and their games, and go to the training grounds to see the players.

"So we're very clued up in terms of how well they're doing. I've seen a lot of Jordon's play in a lot of games and he has been outstanding; that's the reason why we sent him out, to get that game experience.

"You can see where he fits into our model and how we play. We need to just decide whether it is the right thing to bring him back or continue with the great development he's got at Derby at the moment.

"If we do bring him back, it would be to contribute. He's doing very well and you can see, at 19 years of age, he's going to be a great player for Liverpool in the future. [The loan] is until the end of the season but reviewed in January, so we could [bring him back] if we wanted to."