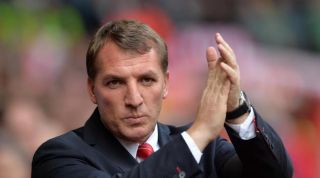 The Italy striker almost enjoyed a dream debut when going close with an early header in Sunday's Premier League clash and linked up well with Daniel Sturridge and Raheem Sterling up front, before coming off after an hour.

Sterling, Steven Gerrard from the penalty spot and full-back Alberto Moreno scored the goals, but Balotelli also impressed his manager.

"He was excellent," said Rodgers.

"I thought the two boys up front and Raheem in behind were a constant threat. He's a good guy, he's worked well this week and I think everyone could see the team effort as he was pressing as much as he could. He was very good."

Sterling was also singled out for his contribution as Rodgers celebrated his 100th game in charge with a superb all-round display.

"I think he's flexible and we've tried to develop him to not just be a wide player but to also be able to play on the inside - and I thought he was excellent," added the Liverpool manager.

"From the inside, he can turn and he can press. Then, when we went to 4-3-3 he's got that pace to go on the outside. It's important for me that they have that intelligence to play in different positions and he can."

It was especially satisfying for Rodgers to see his team bounce back from Monday's loss at Manchester City and beat opponents who had won their first two matches of the new campaign.

"I thought we were terrific - outstanding," he beamed.

"It's a difficult place to come because they've started well and Mauricio [Pochettino] is an excellent coach who will do very well here, so to get to two wins out of three is great and I'm reasonably happy."