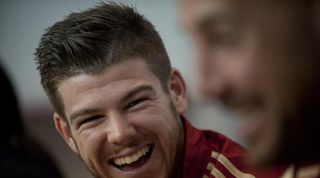 The Anfield outfit travel to the Etihad Stadium on Monday for a Premier League blockbuster against the side they handed the title to last term.

Liverpool's late-season collapse saw City win their second title in three seasons but Rodgers has wasted no time in bolstering his squad since the departure of star striker Luis Suarez.

Moreno – one of many new faces at Liverpool – signed from Sevilla for a reported £12million earlier this month but was ineligible to play the club's season-opener against Southampton last week.

But he has been given the all-clear to face City and Rodgers said if required, Moreno can slot in straight away.

"He has got huge potential," Rodgers told Liverpool's official website.

"We needed a left-side player. We monitored him for a while and when we felt we got the value and the worth, we were able to clinch the deal.

"He's a really exciting young player. When you watch him, he's very attack-minded, very quick and he serves the ball really well.

"At 22, he's hungry to succeed. He has got improvements to make but he's one of the players we've brought in this summer who is ready to play straight away.

"We had a practice game here last week and he looked very good. He's one who is coming straight out of La Liga. He's come from the Europa League champions.

"He's done great. Last season he was one of the top left-backs in Europe and was highly sought after.

"He's a boy that will fit well into our way of working."