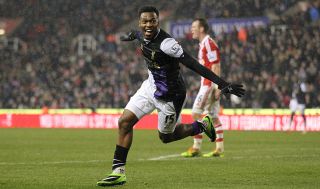 Sturridge missed nine games due to an ankle injury, but the England international came off the bench on Sunday to resume his prolific partnership with Luis Suarez once again.

Rodgers' side were coasting courtesy of an own-goal from Ryan Shawcross and Suarez's opener, but goals from former Liverpool duo Peter Crouch and Charlie Adam made it 2-2 at half-time.

Steven Gerrard put the Merseyside outfit back in front from the penalty spot on his 650th appearance for the club after Marc Wilson was harshly adjudged to have upended Raheem Sterling early in the second half.

Sturridge wasted no time in linking up with Uruguay striker Suarez as he laid on a 22nd top-flight goal of the season for the Premier League's leading scorer.

And the former Chelsea man chipped in with a goal of his own to round off the scoring after Jon Walters had made it 4-3 to ensure Liverpool won at the Britannia Stadium for the first time in the top flight.

The victory moved Liverpool back above neighbours Everton into fourth place and Rodgers was full of praise for the fit-again Sturridge.

He told Sky Sports: "I thought he was outstanding coming in after being out for so long, with his pace and movement.

“You can see for Luis' goal there, his pace takes him away and his skill to bring it inside. Two outstanding players and anyone will tell you the top players can play together."

Rodgers was concerned by the manner in which his side surrendered a 2-0 lead, but was more than happy with their attacking display.

"We made mistakes definitely, which wasn't so great and we'll assess that," he added. "But to come here and scored five goals, and it's the first time Liverpool have won here in the Premier League, was fantastic."

Stoke felt aggrieved by the penalty awarded by referee Anthony Taylor six minutes into the second half and Rodgers could see why the home side felt hard done by.

"I think it's one that I'd call a Spanish penalty, where the attacker goes into the defender, the defender doesn't get the ball, but momentum takes him over," he explained.