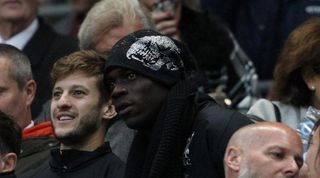 The Italy international often brings with him character and controversy, the 24-year-old creating headlines for setting fire to his house with fireworks and throwing darts at youth team players while at Manchester City.

However, with his antics come goals - Balotelli scoring 26 Serie A goals in 43 appearances for Milan, having put 20 balls in the back of the net for City in 54 league matches.

Rodgers said he has had to curb Balotelli's ego - informing him that Steven Gerrard will be taking penalties ahead of the Italian, and also denying him a chance to announce himself on Merseyside with a press conference.

"If you'd have seen Mario in training, he's been out for 45 minutes doing extra work on free-kicks and penalties," Rodgers said.

"And yes, he has asked who takes the penalties. He's brilliant at it. And he knows it as well.

"But Steven Gerrard is the penalty-taker. Mario has been told that. He understands the situation."

"It was a case of: 'Get up the stairs, hold the shirt, get your photograph taken and get straight out.'

"You can make them feel as if they are more than what they are. Then the ego goes with it."

Rodgers continued to chant his 'team first' mantra, despite Balotelli's signing potentially a polarising one for the club whose anthem is 'You'll Never Walk Alone'.

"Everything he does off the field gets monitored and looked at," the former Swansea City boss said.

"He does kind things and, yes, stupid ones.

"He is a guy who I believe can help us. But he's not the star. The star of the team is the team."

He added: "But Mario's a good player, a talented boy, and just 24 years of age. My message to him is: 'Work your socks off, listen, and then your undoubted talent will come through.'"