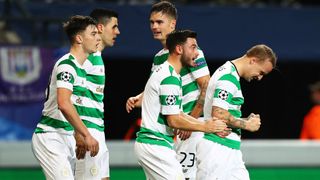 Leigh Griffiths and Scott Sinclair scored either side of a Kara own goal to secure the visitors' first group stage victory in almost four years – a 3-0 triumph on Wednesday.

A key feature of the Hoops' impressive display was their retention of possession, which helped take the sting out of any potential fightback from the home side in Belgium.

Rodgers saw the professional performance as a marker of Celtic's progression.

"It shows the development in the squad over the last year or so. The players deserve a huge amount of credit," the Celtic boss told reporters at his post-match news conference.

"I thought defensively we were exceptional in terms of our pressing and the aggression to get the ball back.

"I still think we are times a bit embarrassed to have the ball for longer periods. I said to the players afterwards that's something we have to work on because at this level you have to be that bit more patient, but you can see that we are growing at this level.

"As a coach you're looking for progress. We can be better."

Young full-back Kieran Tierney was again influential at both ends as his inch-perfect cross for Griffiths' opener set the Scottish champions on their way.

The 20-year-old acknowledged the value of beating an opponent likely to be their nearest rivals in Group B.

"It's a big result for the club, that's what we needed. The games against Anderlecht will be important so it was good to get this result," Tierney said.

"Our plan was to play our game and that's what we did. When the chances came, we took them."