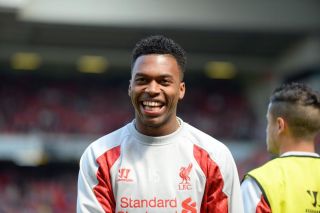 The England international limped out of his team's 3-2 win over Manchester City on April 13 with a hamstring problem, and then missed the 3-2 victory at Norwich City the following week.

Sturridge was only fit enough for a place on the bench against Chelsea last Sunday, and was introduced into the action just before the hour mark as Liverpool went down 2-0 to lose control in the Premier League title race.

On Friday, Rodgers conceded that the striker was probably not fit enough to have been included in that game, and that he remained a doubt for Monday's crucial fixture at Selhurst Park.

"We'll see over the next 48 hours," said Rodgers. "He hadn't trained since he got injured, so it was a bit much (against Chelsea).

"He had worked really hard to get back and we needed something on the bench that could support us and help us in the game but unfortunately, it wasn't to be.

"But he's certainly in a much better place. He's worked tirelessly this week with the medical team. He re-joins the group and we'll see how he is come Monday."

Sturridge's striker partner Luis Suarez was named PFA Player of the Year on Sunday, after a season that has seen him net 30 goals in 31 Premier League appearances to date.

And Rodgers revealed the Uruguayan was thrilled that his stellar form has been recognised.

"Congratulations to him," added the former Swansea City boss. "It was an award that was really special for him because it came from his peers.

"He has been outstanding in all my time here and obviously, in particular, this season.

"So it was very well deserved and I know he really respected it, coming from the players in this country. I know he's happy."