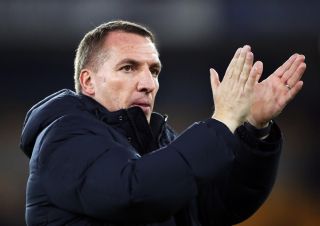 Leicester manager Brendan Rodgers has urged other players to step up and score goals in the absence of top scorer Jamie Vardy, after their 1-0 defeat to Norwich at Carrow Road on Friday.

Jamal Lewis scored his first Premier League goal to give Norwich the surprise victory, with a clever volley past goalkeeper Kasper Schmeichel in the 70th minute.

The Foxes did have the ball in the back of the net, but Kelechi Iheanacho’s second-half effort was ruled out after a VAR review for handball by the forward.

Leicester have not scored in their last three league matches and have gone five matches without a win in all competitions, and Rodgers said his side need to keep their confidence.

“The responsibility is for the team to score, our wingers and midfield players,” Rodgers said.

“In areas of the field, it’s just dried up a little bit, not just with Jamie (Vardy) but with other players.

“But we continue to work, there’s no magic formula you’ve just got to keep your confidence.

“We’ve got into a fantastic position and with 10 games to go now we have to continue to work, stay focused, keep the confidence which is important and get back to how we’ve worked most of the season.

“We can’t dance around the truth – it’s one where we need to find that quality again.

“Defensively we’ve been pretty strong all season, tonight was a poor goal from our perspective, so that side doesn’t worry me but we certainly need to find that quality again.”

Daniel Farke insisted the win over Leicester could boost their confidence, after it reduced the gap to 17th-placed Aston Villa to just four points.

“It was not so much a topic today – the table and the relegation battle, for us it was more important to return back to the top of our game and this is good for the belief.”

Farke believes the victory has put Norwich back in contention to stay up, but knows his side still face an uphill battle.

He added: “We can’t complain too much that everyone writes us off, because we are in the most difficult position.

“We know it will be a long road and we are still in the worst position and the biggest underdog but we’re back in the mix.