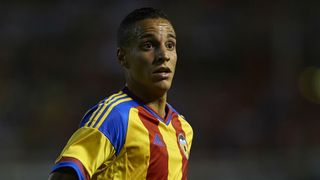 Valencia forward Rodrigo is set for three months on the sidelines after the Liga club confirmed he has suffered a partial knee ligament tear.

Rodrigo limped out of the 2-1 defeat to Atletico Madrid on Sunday with 23 minutes played at Estadio Vicente Calderon. The 24-year-old was replaced by Paco Alcacer, who scored Valencia's consolation in the 2-1 defeat.

Rodrigo impressed during a loan spell at Estadio Mestalla last season and secured a permanent move from Benfica in June, signing a four-year deal.

However, he has struggled in front of goal, with only one Champions League strike from his 12 appearances in all competitions, a strike rate that will not improve until 2016 with news of his latest injury.

"As indicated by the tests that have been submitted on Monday, Rodrigo suffered a partial tear in the posterior cruciate ligament in his left knee," a Valencia statement read.

"The player will follow a conservative treatment. The estimated recovery time is at three months."