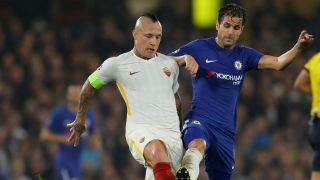 Radja Nainggolan believes Roma were superior to Chelsea in Wednesday's six-goal thriller in the Champions League.

Aleksandar Kolarov struck before half-time to give Roma some hope after David Luiz and Eden Hazard had put Chelsea in control against the Italian visitors, who were ahead with 20 minutes remaining thanks to Dzeko's quick-fire double.

Dzeko netted a stunning volley to equalise before Hazard ensured the points were shared in Group C, though Roma midfielder Nainggolan felt his side deserved more from their London trip.

"I think we had a great performance and it was so strange to concede the equaliser for 3-3, as we felt that we were the better side," Nainggolan told Mediaset Premium.

"We should've hung on to the lead a bit longer. It's a good point, nonetheless.

"We've conceded a few too many unfortunate goals lately. We gave the ball away too easily, we can certainly do better in some things, but we created a lot and I thought we played much better than Chelsea.

"We lost against Napoli, even if we could've equalised, so we tried to build on that second-half performance and attacked Chelsea from the start. I think we gave it our all and deserved the victory."

Belgian star Nainggolan – who turned down the chance to join Antonio Conte at Chelsea previously – added: "I've always been convinced of what I want. I think winning at Roma would be unforgettable. I stayed because I am happy here, I received a lot from this club and want to give back. I've rarely changed clubs in my life, so I don't feel the need to move often."