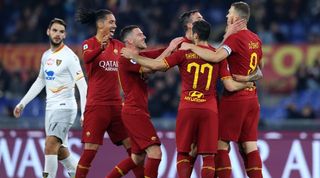 Both players are currently on loan at the Stadio Olimpico and manager Paulo Fonseca has been impressed by what he has seen.

Speaking about Smalling, Fonseca told Sky Sports: "I would like Chris to stay. We are speaking. I don't know if it is possible because of the situation with Manchester United, but I would like so much for Chris to stay here with us because he is very important.

"He is a great player, a great man with a great attitude every day and for all of these reasons I would be very happy if Chris stays."

As things stand, Smalling is due to return to United at the end of this season. However, the 30-year-old has already said he is open to extending his time with Roma beyond this campaign.

Smalling has played 26 times in all competitions this term, including the 4-0 win over Lecce at the weekend.

As for Mkhitaryan, his time in the Italian capital has been interruped by injuries. The Armenia international provided an assist in Sunday's victory - his 18th appearance of 2019/20.

Yet Fonseca is still keen for Mkhitaryan to stay permanently as well.

"Mkhi during this season got some injuries but he is returning now and he is proving his quality," he continued.

"Let's see. He is a player with great decisions on the pitch and I would also like to keep Mkhi in our team."