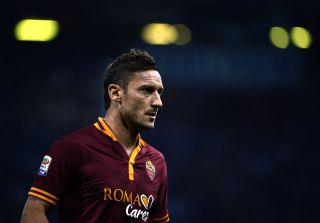 The 37-year-old has rolled back the years with a series of impressive performances for a side who have won all eight of their Serie A fixtures this season.

But Totti will be unavailable for the encounter with Francesco Guidolin's side, after he picked up a hamstring injury in the 2-0 triumph over Napoli last Friday.

Garcia admitted it was a blow for the side to lose their talisman, but is confident the squad has enough depth to cover his spell on the sidelines.

"Yes, we've lost the captain for a few games and when a team loses its best player it's never good news," the coach said.

"No one can play like Francesco because he's unique.

"But we've shown that we're a strong, united group - we'll be a different team against Udinese, but I hope we'll still be a strong one."

With transfer-window signing Gervinho also set to miss the fixture with a quadriceps injury, Garcia must decide how to reshape his attacking unit.

But he insists there are various options he can employ.

"There's Marquinho, Adem Ljajic or Marco Borriello available, without forgetting that we can also push Miralem Pjanic further forward into the front three," he continued.

"We could also put someone else in who's more inclined to run into space high up the field. We'll see on Sunday."