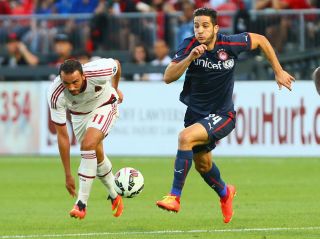 Last season's Serie A runners-up have parted with €13 million to sign Manolas, with a further €2m to follow if he reaches certain milestones.

Manolas had been a reported target for Arsenal - who recently sold Belgium defender Thomas Vermaelen to Barcelona - but Arsene Wenger has been pipped to the post by countryman Rudi Garcia.

The 23-year-old began his career at Thrasyvoulos and moved to Olympiacos in 2012 after three seasons with AEK Athens.

Two Greek Super League titles followed and Manolas was part of the Greece squad that made the last 16 of this year's World Cup in Brazil.

He played every minute in a defence that conceded just twice in four games, but was eliminated on penalties by Costa Rica in the first knockout round.