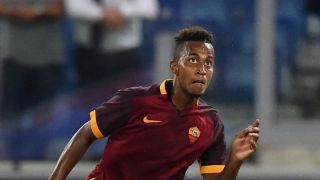 Highly rated Roma defender Elio Capradossi faces an extended spell on the sidelines after sustaining a knee ligament injury while on international duty with Italy's Under-20 side.

The 19-year-old had to be replaced after just 38 minutes of his country's clash with Germany and scans showed he had torn the cruciate ligament on his left knee.

Capradossi has been regarded as one of Roma's rising stars since joining the club's youth set-up in 2010.

The Ugandan-born centre-back featured prominently for the Primavera side last season and was included in the senior squad for the first time last Sunday when he was an unused substitute in the victory over Juventus.