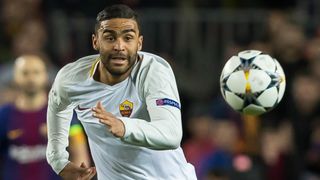 Gregoire Defrel has joined Sampdoria from Roma on a season-long loan deal, with the option of a permanent move.

The forward made 15 Serie A appearances for Roma after signing from Sassuolo in July 2017, scoring one goal in the 5-2 victory over Benevento in February.

The 27-year-old began his career at Parma and played for Foggia and Cesena before arriving at Sassuolo in 2015.

His most prolific season came in 2016-17, when he scored 12 goals in 23 league starts for the Neroverdi, attracting the attention of Roma boss Eusebio Di Francesco.

However, his chances were limited in a Roma side spearheaded by Edin Dzeko and Diego Perotti, and he joins Samp in the hope of more regular first-team football.