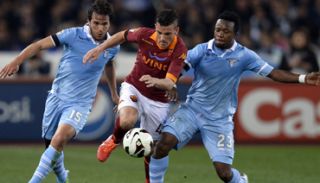 The match comes barely one month after a meeting in Serie A preceded by violent clashes in the streets of Rome in which several people were stabbed.

Around 200 Lazio fans threw bottles and other objects at officers who responded by firing tear gas and baton-charging supporters.

The kick-off for Sunday's match at the Stadio Olimpico, which offers both teams a last chance to qualify for the Europa League, was brought forward from 21:00 local time to 18:00 to reduce the risk of trouble and 2,000 police will be on duty.

To add fuel to the fire, fans from the two clubs have both been involved in ugly incidents of racism this season.

Lazio were forced to play two home matches behind closed doors in the Europa League after their fans racially insulted Borussia Monchengladbach players, their fourth racism offence of the season in European football.

Roma have been handed two successive 50,000 euros fines by Italy's disciplinary tribunal following racist chanting by their fans in the matches away to AC Milan and at home Napoli.

If that were not enough, Roma are also facing hostility from their own supporters after a second disappointing season in a row in which they finished sixth in Serie A, despite some flashes of inspiration from 36-year-old talisman Francesco Totti.

Roma fans have made their feelings clear, unveiling a banner that read "win or run away" during their 2-1 win over Napoli last Sunday while many are also enraged at the club changing their badge on Wednesday, four days before the final.

The new design, mocked by Lazio fans, features the word Roma under the famous depiction of a female wolf, instead of the letters ASR.

Lazio fans are also disillusioned after their team who were battling for a Champions League for much of the season before dropping away to finish seventh and miss out on even the Europa League.

High ticket prices have also caused anger in a country plagued by high unemployment and an economic crisis. The cheapest are going at 30 euros for the areas behind the goals, preferred by the hardcore Ultras, with the most expensive seats up to 120 euroes.

Both teams have closed themselves away from the public, with Lazio travelling over 150 kilometres to Norcia in Umbria.

Roma supporters will at least be buoyed by the likely return of hard-tackling midfielder Daniele De Rossi and defenders Federico Balzaretti and Marquinhos.

Lazio have everyone available except the injured Louis Saha.