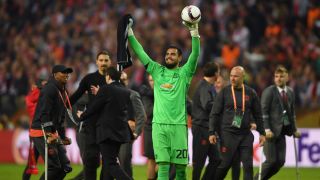 Manchester United goalkeeper Sergio Romero is determined to stay at Old Trafford and battle for the number one shirt.

With David De Gea the established first choice for Jose Mourinho, Argentina international Romero has made just six Premier League appearances in two seasons, although he was central to United's Europa League triumph.

But De Gea continues to be linked with a move to Real Madrid and, while United would reportedly look for a replacement, Romero is adamant he can become a regular under Mourinho.

"I could be the number one or number two, it all depends on hard work and I do work hard," said the ex-Sampdoria keeper. "My intention is to stay.

"I chose to come here because of what the club is. It's a huge club, one of the biggest in the world, something I just couldn't say no to. I knew it might be a little harder here to play a lot.

"Last year, with Louis [van Gaal], I played games, I felt good and so I thought I could be important for the team in those moments despite not playing a lot.

"But you know never know what's going to happen in the future so you have to keep working hard for what comes next."