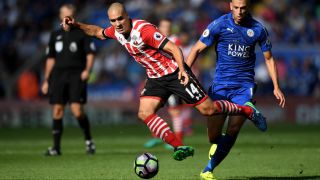 The former Chelsea midfielder has made a strong start to life at St Mary's Stadium since signing in a reported £5million deal in August and was named as the club's Player of the Month for September.

Puel has been thrilled by Romeu's impact and believes Spain head coach Julen Lopetegui will be watching with interest.

Romeu has been capped at Under-21 and Under-23 level, but is yet to feature for the senior side.

"I'm not surprised by his qualities because he is a very good player," Puel said ahead of Sunday's home game against Burnley.

"I think the system of the team is interesting for him because he is alone in front of the defence which is a good position for him.

"Now we know his work in every game is very important for the team. He plays with regularity – every time at a good level in his game.

"He is a technical player and also strong in the recovery of the ball. For the future he will be a very good player for Southampton and I think he can hope also for selection for his country in the future because his level is very interesting."

Southampton will have striker Shane Long (hamstring) assessed ahead of Burnley's visit, but full-backs Ryan Bertrand (hamstring) and Cedric Soares (foot) are out.

Record signing Sofiane Boufal, meanwhile, is still building up his match fitness and will not play against a side Puel rates highly.

"It is important to play to score and to always have possibilities when you attack," added the Frenchman.

"They are a good team with good defensive organisation and it's very hard to score against them. We saw this with their last game against Arsenal where they were unlucky.

"The first game after the international break is a difficult game. It is important to have a good attitude and a good team spirit and that there is quality on the pitch to find chances against this team."

Southampton sit 10th in the Premier League after seven matches and hold a two-point advantage over Burnley.