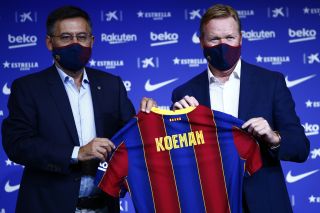 Ronald Koeman has admitted he could not turn down his “dream” job when former club Barcelona came calling.

The 57-year-old Dutchman, who led Holland to qualification for the postponed Euro 2020 finals following his appointment on a four-and-a-half-year deal in February 2018, was named as Quique Setien’s replacement on Wednesday.

In a statement on the Dutch football association’s website, he said: “It was an honour to be the national coach of the Netherlands. Over the past two and a half years, I have done everything I can to achieve success.

“I look back with pride on what we have achieved together in that period. The Dutch national team has a bright future, I am convinced of that.

“Everyone knows that Barcelona is my dream club. It feels very special to me to be able to become a coach there.”

The Dutch FA’s professional football director Eric Gudde admitted the governing body’s regret at Koeman’s departure but acknowledged his contribution to the cause.

He said: “We regret Ronald’s decision but respect his choice.

“In the period that Ronald has been national coach, he has achieved very good results with the Dutch national team. He has given the national team colour to the cheeks again after a number of difficult years, and we are very grateful to him for that.

“Meanwhile, the group of players has developed tremendously. In that respect, we can continue on the same path.”

Koeman’s appointment, which had been signalled in advance by Barca president Josep Maria Bartomeu, was confirmed in a brief statement on the Catalan club’s official website ahead of a formal press conference on Wednesday evening.

It said: “FC Barcelona and Ronald Koeman have reached an agreement for the Dutchman to take over as first-team coach until 30 June 2022.”

The Dutchman has been drafted in following Setien’s swift exit in the wake of Friday night’s humiliating 8-2 Champions League drubbing by Bayern Munich.

He is the third man to take charge this calendar year, with Setien having only succeeded Ernesto Valverde in January.

The former Southampton and Everton boss will inherit a side which finished five points behind LaLiga champions Real Madrid and which failed to win a major trophy this season for the first time since 2013-14.

Barca last tasted glory in the Champions League in 2015 under Luis Enrique and, while Bartomeu has dismissed claims that star man Lionel Messi could leave the Nou Camp as a result of their recent decline, Koeman has a significant task on his hands.

He at least starts with plenty of goodwill in the bank from his six years as a player with the Catalan giants.

The defender, nicknamed “Tintin”, made 350 appearances and scored 106 goals as part of Johan Cruyff’s “Dream Team” between 1989 and 1995 and claimed 10 trophies along the way – four league titles, a European Cup, a Copa del Rey, a European Super Cup and three Spanish Super Cups.

He is perhaps most fondly remembered for his winning goal in the 1992 European Cup final against Sampdoria at Wembley.

Koeman began his playing career in Holland with FC Groningen, Ajax and PSV Eindhoven and returned after his time in Barcelona to join Feyenoord, where he has also worked as a coach.

He has managed previously in Spain during a short spell with Valencia.