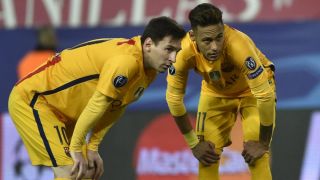 Ronaldinho believes Lionel Messi is nurturing Neymar in the way he did the Argentina superstar during his own formative years at Barcelona.

When the mercurial Messi made his first-team breakthrough more than a decade ago, Ronaldinho was the toast of the Camp Nou and he feels his countryman Neymar is also benefitting from following in the footsteps of one of the greats of the game.

"I believe so, that the attention and dedication that I had for Messi, he is doing the same for Neymar," Ronaldinho said.

"It is very important for an experienced player to show the way and share the journey with a young player and Messi is doing that.

"This is why Neymar is adapting and playing very well at Barcelona.

"Neymar is a talent and is a good friend. He is one of the top players in the world. It's very important to have experienced and young players to make a good team."

Messi announced his retirement from international in the aftermath of Argentina's penalty shootout loss against Chile in the final of Copa America Centenario - the Albiceleste's third defeat in a major final in the past three years.

Back in 2007, Messi was on the receiving end of a 3-0 loss against Brazil in the Copa America but Ronaldinho does not believe the lack of a major honour affects his standing in football's pantheon.

"Since Messi was young, I knew he would be an amazing player," he said. "As a person Messi is still the same and humble like when he started, but as a player he just keeps getting better.

"For me, this does not change anything - losing in four finals. He is still the best. If he really does leave [retire], it will be a loss for football, nothing else."