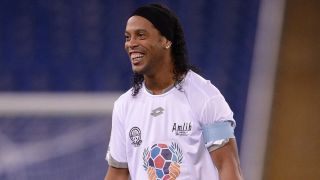 Ronaldinho is hoping to sign for a team competing in this year's Copa Libertadores, according to his agent and brother Roberto de Assis.

The 36-year-old Brazilian star has not played football competitively since his departure from Fluminense in September 2015, instead taking part in exhibition matches around the globe.

But Assis claims the former Barcelona and AC Milan playmaker is ready to make a comeback in South America.

Brazilian side Coritiba, who will not feature in the 2017 Libertadores, have confirmed their interest, while contact has also been made with Uruguayan side Nacional.

"The project is to play in 2017," Assis told Uruguayan outlet Ovacion Digital. "After a quiet year in which we had the opportunity to fly around the world, travel, see other countries we did not know, to be with people, to feel their affection, that's the idea.

"The 2017 project is to play again and see how things happen. We think he will play in a team that is in the Libertadores.

"I spoke to some intermediaries [about Nacional], but things are still very quiet. When something official arrives, the club will be able to speak."

Ronaldinho was linked to Chapecoense in December as their rebuilding process got underway following the Colombian air tragedy that killed 71 people including their players, backroom staff and technical commission.