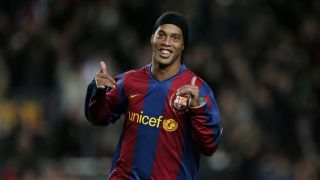 Ronaldinho shot to stardom with his silky skills and joyful approach to the game after joining Barcelona in 2003.

The virtuoso forward was the defining figure under Frank Rijkaard, helping to lay the foundations for one of the most successful eras in the Catalan club's history.

A two-time FIFA World Player of the Year during his time at Barca, Ronaldinho claimed two LaLiga titles and a Champions League crown when at the peak of his powers.

He produced a host of memorable moments in the famous shirt, from a standing ovation at the Santiago Bernabeu to a dancing toe-poke against Chelsea, and here we take a look at the club's other Brazilian greats.

GAL MORNING!!!Is this one of Ronaldinho’s best goals?Today marks 11 years since this strike November 25, 2017

Romario spent a year and a half at Barcelona and his 30 goals in 33 appearances fired the club to the LaLiga title in 1993-94, earning him the FIFA World Player of the Year award. He netted an El Clasico hat-trick in a 5-0 win over Real Madrid but was also no stranger to controversy - banned for five matches for punching Diego Simeone during his time at Camp Nou. Frustration at Romario's attitude and a drop-off in form led to his departure from the club midway through the 1994-95 season.

Ronaldo joined Barca for a world record fee of €15.5m and won the Copa del Rey, the Cup Winners' Cup and the Supercopa de Espana during his one season in Catalonia, although he is better remembered for a five-year stint with Real Madrid that yielded two LaLiga titles. The 2002 World Cup winner actually urged recent record signing Philippe Coutinho not to join Barcelona from Liverpool, claiming Brazilians were treated badly by the club. Ronaldo scored 47 goals in 51 appearances for Barca in all competitions and also followed Romario by winning the FIFA World Player of the year award with the club.

It is 20 years today since the famous goal by . Remember? Define it with a hashtag and share the video! October 12, 2016

A third Barcelona Brazilian to win the FIFA's top individual honour, Rivaldo also claimed the Ballon d'Or for his performances in 1999. He scored 136 goals in 253 appearances for Barca, winning two LaLiga titles, the Copa del Rey and the UEFA Super Cup. However, for all of that success, Barcelona failed to reach a single major European final during Rivaldo's time at the club.

Do you remember this Rivaldo goal against Valencia?Força Barça! April 17, 2016

Current Paris Saint-Germain full-back Dani Alves boasts more Barcelona honours than any of his compatriots on this list. During his time at Camp Nou, Alves laid his hands on six LaLiga titles, four Copas del Rey and Supercopa de Espana crowns and a trio of wins in the Champions League, UEFA Super Cup and Club World Cup. He may not command the attention of his attacking colleagues, but Alves' Barca record should not be overlooked.

Neymar formed part of the club's famous 'MSN' attacking trident alongside Lionel Messi and Luis Suarez but elected step out of the shadow of the Argentina international by making a world-record switch to Paris Saint-Germain for €222million last year. He scored 105 goals in 186 appearances for Barca, winning the Champions League, two league titles, three Copas del Rey, the Supercopa de Espana and the Club World Cup. Things turned somewhat sour between Neymar and the club following his departure, although he did congratulate Coutinho on his move.

This is Neymar's work of art for Barça's third goal November 8, 2015