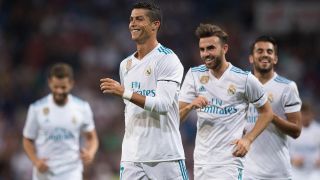 Real Madrid star Cristiano Ronaldo is from another planet and is the world's best, coach Zinedine Zidane said.

Ronaldo, 32, enjoyed another stellar season in 2016-17, scoring 42 goals in all competitions, helping Madrid win LaLiga and the Champions League.

"Ramos is the leader, Cristiano is from another planet and Benzema is pure talent," Zidane told beIN Sports.

The Frenchman praised Ronaldo for understanding, saying: "It was easy to persuade him.

"He's a very intelligent guy and he knows himself. Cristiano pushes his team-mates on. He's the best."

returned to train with the group at this morning! September 5, 2017

On his team's style, Zidane said he wanted Madrid, who host Levante in LaLiga on Saturday, to play a possession-based game, even against rivals Barcelona.

"I have so many extraordinary players that I want the team to play well," he said.

"I am looking for the best style and that is to have more possession than your opponent, even against Barcelona."