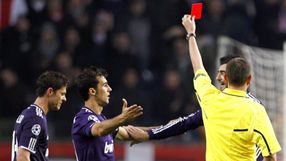 The prolific Portuguese took his tally to 17 in 12 matches in all competitions since the start of October, netting a low drive and a penalty after goals before the break from France striker Karim Benzema and Spain defender Alvaro Arbeloa.

However the win was partly overshadowed by two bizarre red cards for Madrid duo Xabi Alonso and Sergio Ramos in the dying stages of the game, with the Spanish pair both dismissed for time wasting.

Real had already qualified for the last 16 of Europe's elite club competition but their latest success leaves group rivals AC Milan five points behind in second place with only one match left. The Italians' 2-0 win in Auxerre means both Ajax and the French club have no chance of making the knockout stage.

Nine-times winners Real, meanwhile, are hoping new coach Jose Mourinho will lead them beyond the last 16 for the first time since 2004 and by topping the group should avoid the strongest teams in the draw in Nyon on December 17.

The Portuguese was unhappy with the referee, who showed Xabi Alonso and Sergio Ramos second yellow cards for time wasting late on, dismissals that will mean the pair are suspended for the final group game at home to Auxerre on December 8.

"The Auxerre match is not important but I still don't like it," Mourinho said. "The match was already dead and when it's three or four-nil there is no point in showing those cards."

With victory crucial for the home side, Ajax coach Martin Jol had fielded an attack-minded starting 11 at the Amsterdam arena with striker Luis Suarez leading a three-man forward line.

The boisterous Ajax fans did their best to warm up a chilly stadium in the Dutch capital and inspire their players but the four-times European champions never looked like pulling it off and crashed to their biggest home defeat in Europe.

Despite missing injured regulars Gonzalo Higuain, Sami Khedira and Ricardo Carvalho, it was the visitors who enjoyed the brighter start, with Ronaldo, Benzema, Mesut Ozil and Pedro Leon causing problems for the Ajax defence.

Benzema forced a smart save from Netherlands goalkeeper Maarten Stekelenburg with a powerful drive from a tight angle in the 19th minute and Ronaldo was furious when his penalty claim was ignored moments later.

Real were ahead in the 36th minute when Benzema finished superbly from the edge of the penalty area after Ozil's clever flick before Arbeloa bagged a rare goal with a speculative long-range effort in the 44th.