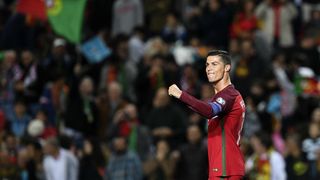 Cristiano Ronaldo has equalled Gerd Muller and Robbie Keane on 68 international goals following his double in Sunday's win over Latvia.

The Portugal captain scored a penalty and a brilliant volley a 4-1 World Cup qualifying victory to stretch his run to seven goals in his last three appearances for the European champions.

Ronaldo, who hit the post with a second penalty and steered a header against the crossbar late on, is now joint-fourth in the scoring charts in Europe alongside Germany great Muller and Keane, who retired from Republic of Ireland duty in August.

The Real Madrid star, who has scored more goals than any other active player in international football – 12 clear of Lionel Messi – is now behind only Ferenc Puskas (84), Sandor Kocsis (75) and Miroslav Klose (71) in the continent's history.

He has some way to go to become the greatest international goalscorer in history, though. That honour still belongs to Iran great Ali Daei, who hit 109 goals in 149 appearances across a 13-year career.