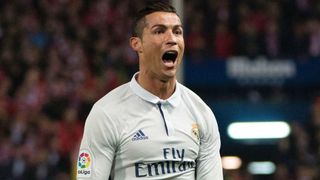 Ronaldo scored all three goals, one in the first half and two in the second, including a penalty, as Real Madrid claimed the bragging rights in the final LaLiga derby at the Vicente Calderon before Diego Simeone's team leave their historic home at the end of the season.

Ronaldo is vying with 2015 winner Lionel Messi and the likes of Atletico's Antoine Griezmann for the biggest individual prize in world football.

And Madrid coach Zidane, who claimed the accolade himself in 1998, believes the Portugal star will be awarded his fourth Ballon d'Or on January 11.

"I've never had doubts that Cristiano is the best and tonight closes the debate," he said.

Zidane, who guided Madrid to Champions League glory with a penalty shootout victory over Atletico in the final at San Siro in May, was reluctant to describe the comprehensive victory on Saturday as the highlight of his brief career in the dugout so far.

"I do not know if [it is] the best, but we played a huge game against a difficult opponent and in a stadium where it is difficult to win," he said.

"In the second half it was logical Atletico's pressure [increased] in those first 15 minutes, but we produced the necessary intensity against a complicated opponent.

"It is an important victory for us, on a difficult pitch and with a rival that gives you a war. We played a very good game from the beginning. There are not many teams that can win on this pitch and we did well."

Asked if he will miss the Calderon when Atletico move to a new ground for the 2017-18 season, Zidane said: "Yes, sure. The players, fans... they are going to miss it. We're happy about this victory because there are not many teams that win here."